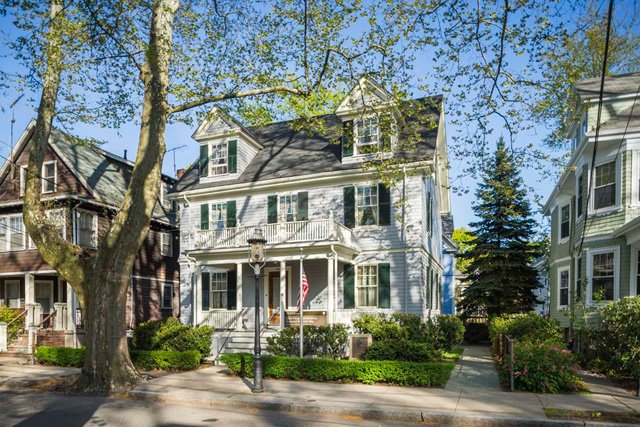 Joseph Patrick Kennedy carried his bride, Rose Elizabeth Fitzgerald Kennedy over the threshold of this home shortly after they were married in 1914. He purchased it for sixty-five hundred dollars, and was one of the youngest bank presidents in America when he won Mrs. Kennedy’s hand in marriage. The two shared this home for six years, moving to a larger home in the neighborhood in 1920. They had four children while living here, Joe Junior, John, Rosemary, and Kathleen. At its peak, this five-bedroom home supported eight people, including Mr. and Mrs. Kennedy, their four children, and their two live-in maids, Mary and Alice, who all shared one bathroom as well. The space soon became cramped, and Mr. Kennedy’s success was growing, allowing them to move into a larger home in the same neighborhood.

When JFK was born, his family called him Jack. He was born in the Master bedroom on the second floor, making him one of the last Presidents born at home. Mrs. Kennedy was the head of the household, supervising everything from the maids’ schedules to the children’s reading lists. Jack was often sick as a child, and turned to reading to keep himself occupied, and Mrs. Kennedy kept tabs on the material Jack would read. This home became a National Historic Site in 1967. After the Kennedys moved out, three other families lived here, and in 1966, Mrs. Kennedy restored the home to its 1917 appearance. There were no photographs, leaving Mrs. Kennedy to draw on her own memories of the interior. In 1969, she turned over the deed of the house to the National Park Service, calling it her “gift to the American people.”